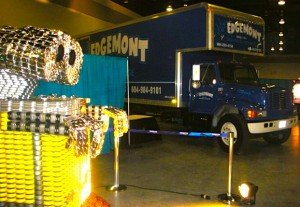 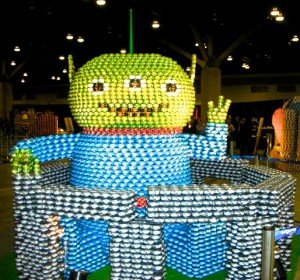 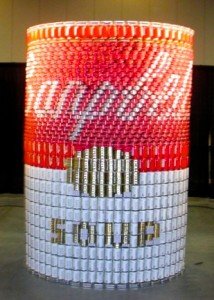 Edgemont Moving & Storage is proud to be back as an annual partner for the Greater Vancouver Food Bank’s Canstruction event. We are excited to announce that it is Edgemont’s 12th year donating trucks and labour to this fun project that stocks the shelves of our local food bank.

Canstruction is an annual competition where teams of architects, engineers, designers and students collaborate to create large installations made exclusively out of canned goods. Each year has a theme and there are awards presented to the top designs.

Edgemont Moving & Storage donates the use of our largest truck and labour to pick up pallets of canned goods and deliver them to multiple building venues. Each team has between 9am on April 25th and 5pm on April 26th to complete their design.

The creations go on display to the general public between April 27th and May 8th at The Four Season Hotel, The Pendulum At Gallery and The Rotunda at Pacific Center.

At the end of the competition, Edgemont Moving & Storage transports 100% of the food used in the structures to the Greater Vancouver Food Bank for distribution to community emergency feeding programs.

Since 2002, Canstruction Vancouver has raised over 1,318,000 cans of food and is the largest contributor to the Greater Vancouver Food Bank.

Think of all the props and costumes you see in a historical movie, an action movie, or a TV show. Vancouver Prop and Costume had a jam-packed 50,000 square...

END_OF_DOCUMENT_TOKEN_TO_BE_REPLACED

Thank you to Susan for sending in a picture of the moving crew and writing this wonderful review! Testimonial :  Out of the seven moves we...

END_OF_DOCUMENT_TOKEN_TO_BE_REPLACED

This week, a client of ours generously donated a Spirit Bear to Canuck Place. After Edgemont successfully completed our client’s move into her new residence,...